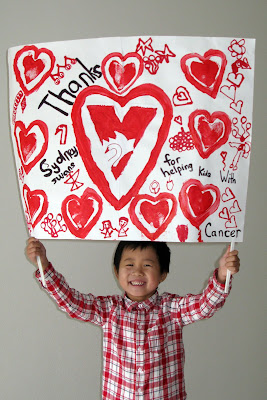 Today we enjoyed going to the Sydney Swans Family Day, which was hosted by the children's cancer charity Redkite. We had lunch at the Sydney Football Stadium, where Stephanie and Jeremy decorated kite-shaped pieces of cardboard and also had their faces painted (red and white, of course!). We were very surprised and pleased when they won 2nd prize in the banner competition - it was their first time making a banner, and we hadn't known what to expect!
After lunch, we walked across to the Sydney Cricket Ground to watch the pre-match "Redkite and OCF Celebrity AFL Game". Then it was time for the match between the Sydney Swans and the Fremantle Dockers to begin.
Jeremy was especially excited to be part of the guard of honour (with Stephanie and some other children of Redkite families) when the Sydney Swans ran onto the field. Last year, he wasn't allowed onto the field because he was too young. Unfortunately, our seats were at the opposite side of the field and we couldn't see any of the guard of honour because of the huge 4m high banner that the Sydney Swans run through.
Although it was pouring with rain this morning, thankfully the weather had cleared up when we arrived at the SCG and it was warm and sunny for the guard of honour. The sky remained clear for the first part of the match. However, we decided to leave at half time because grey clouds were looming, and by the time we walked back to our car it had started raining again!
Posted by Eleanor at 7:22 PM