T+119/17 weeks!
For the past month, we have been changing Jeremy's central line dressing at home instead of asking the nurses to do it at hospital. His dressing needs to be changed weekly, and it is important that everything is sterile to minimise risk of infection at his central line site.
It is amazing how still and quietly Jeremy can lie while we do his dressing, compared to when the nurses used to do it. Whenever it was dressing time at hospital, there would be much fuss and negotiation as to when it would be done - and then he always insisted that Mummy lie down on the bed and he lie down on top of her while it was being changed. At home, it has almost become a non-event!
It is the same story with his nasogastric tube dressing - since we started doing it at home a month ago, there have been minimal complaints and protests by the little man! 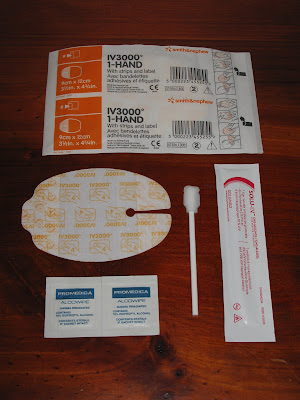 Equipment for changing his central line dressing
Posted by Eleanor at 6:30 PM